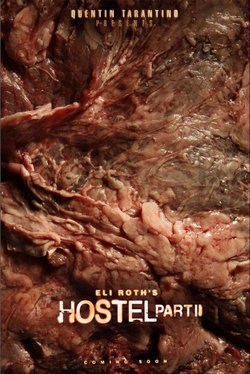 You either love him or hate him, but Eli Roth knows how to provoke a reaction from his fans and detractors. Before hopping on his anti-piracy high horse during an interview with MTV.com, Roth said that the script for his planned Stephen King Cell adaptation is not done and won’t be finished until he directs an episode of Heroes and finishes up Trailer Trash. So, we can expect that sometime next year.

Now, while Hostel: Part II might have missed its best marks (telling the story from the torturer’s point of view) and boiled down to nothing better than exploitive garbage, many people loved it. And even more people watched it without paying for it, as Roth ranted in the interview.

"There are tracking services that track what movies are being downloaded. And a copy of Hostel II leaked out before its release and they had it, it was like millions and millions of hits," Roth explains. "Not only was it downloaded, but in the countries it was downloaded — like Mexico and Brazil — there were copies on the street for practically a penny. You could buy Hostel II for a quarter in Mexico City. As a result, in a lot of countries where the piracy was bad, they just didn’t even release it."

A quarter might still be too much to pay for Hostel II, but illegal downloading is no laughing matter. Roth compares himself to Metallica speaking out against music piracy, and he’s right to some degree — "Unless you start an awareness about it, that it’s not OK, then it’s never going to change," he said.