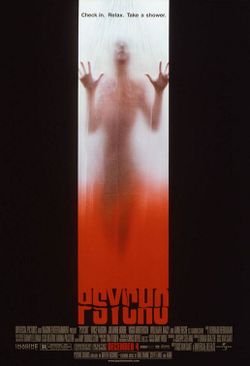 It’s tiring constantly talking about remakes. How many times can you get excited over recycled material? Sure, someone comes along and makes an worth-while remake — John Carpenter’s The Thing and David Cronenberg’s The Fly — but for every good remake, there is a host of horrible rehashes. Yet, Gus Van Sant’s near shot-for-shot remake of Psycho falls into a grey area. Why remake the original shot for shot? Why not just re-release the original?

It’s sad to say that despite how excellent and influential Hitchcock’s original Psycho still is (just watch Vacancy), there are masses who would refuse to watch a movie that is "old" or "in black and white." Van Sant’s remake, however, feels useless. While the subtext of the film might highlight the fact that today’s audiences need a shiny gloss of contemporary marketing to force them into seeing a classic, watching Van Sant emulate Hitchcock feels like a visual film school 101.

Like the upcoming Funny Games remake, the Psycho remake feels like a blatant repackaging. Carpenter, Cronenberg and even Zombie (with his Halloween remake) succeeded because they dived deeper into the films’ themes and mythos. Of course, that’s a double-edged sword, just look at the Dawn of the Dead and Texas Chainsaw Massacre remakes. But if you’re going to make a film, you might as well do with your own style.  At least that will excite people to go back to the original — and that’s more of homage than any shot-by-shot cinematic tracing.