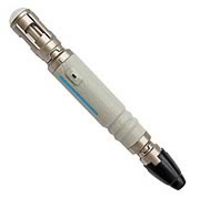 The Sonic Screwdriver is the swiss army knife of time-traveling, phone-booth driving aliens. It can do everything. It can open doors! It can measure radiation! It can perform trepanations! It can circumcise! It can cut a nice slice of gruyere for a mid-dimensional snack! In fact, about the only thing the sonic screwdriver can’t do, as far as I know, is undo screws. It seems sonic vibrations aren’t a very good replacement for pure elbow grease, after all.

It’s always been notoriously difficult for the die-hard Doctor Who fan to secure himself a sonic screwdriver. Sure, you can slip a Time Lord a roofie, but how to find one?

Luckily, Entertainment Earth is now selling a cool facsimile of the Doctor’s trusty multi-purpose tool for the love price of $12.95. You won’t be able to perform as moyel to a Hassidic Dalek with one of these things: the simulacrum’s only real function is as a somewhat fancy laser pointer… which, if you think about it, is what the BBC prop department makes their sonic screwdrivers out of in the first place.