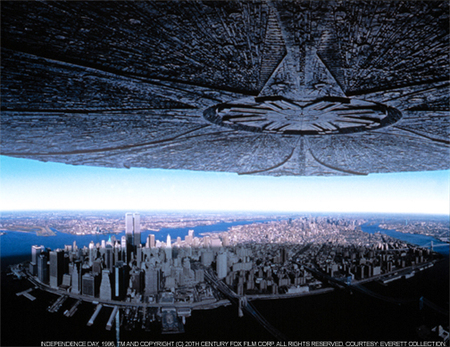 Fans of scifi movies are fans because they have an affinity for science.  But at the same time, they are often willing to overlook the laws of science for the sake of entertainment. There is little correlation between the amount of bad science in a movie and how well the film is received.  Put another way: just because a movie exhibits bad science doesn’t mean it’s bad.  But it doesn’t mean its good, either.

Here are five films that probably would have failed as a science class project. You decide whether they’re good or bad.

Sure, everyone loves the adventure and the special effects, but did you ever stop to think about what you were watching?  George Lucas should have had a crash course in physics before he scripted the space battles and space travel.  Ships banking in space, sound traveling in a vacuum, traveling faster than the speed of light…these things just don’t happen in our universe – and that includes a galaxy far, far away.

For the sake of adventure, most of us are willing to suspend or disbelief when we see people outrunning fireballs and flying alien ships.  We are even willing to overlook the fact that a giant, alien mother ship larger than the moon would have no apparent effect on the tides.  But how can this movie’s writers ask us to overlook the simplicity with which Jeff Goldblum connects to an alien computer network with his Macintosh to upload an unbelievably smart computer virus to take it down?

Jerry Bruckheimer is known for producing big-budget, testosterone-filled action movies.  Too bad that it comes at the expense of scientific accuracy.  OK, so let’s overlook an asteroid that huge going undetected until it is days away from Earth.  We’ll even throw in the freebie of ignoring an asteroid that has inexplicably grown stalagmites.  But we still have to come to terms with a bomb buried a tiny, tiny fraction away from its surface that is able to blow it in half with enough force to divert the chunks away from the fast-approaching planet.

When global warming (the most dreaded antagonist of any sci-fi movie – not!) triggers a new Ice Age, it apparently ushers in a new era meteorology and climatology as well. The climate changes that cause the devastation witnessed in this film occur overnight, not the too-gradual dozens of generations (or decades in very, very rare cases) that it takes in our less-dramatic reality.  Even though other films make gross miscalculations of science, The Day After Tomorrow is perhaps the movie most publicized by naysayers as having ridiculous scientific merit.  Think of it as the poster boy of scifi with bad science.

I like Superman as much as the next guy (in a completely non-touching way, of course) but there are some things that defy even Supes’ abilities.  For example, when Superman is hovering over Earth his cape is flapping.  In airless space. The same airless space that he is able to hear voices from Earth below him, despite the fact that sound doesn’t travel in a vacuum.  And even his super heroics are suspect.  Superman saves a man from falling out of a building but stops so suddenly that it would have been as fatal as the impact itself. And when he lifts that giant rock and the big Daily Planet globe, the weight of each of those would have broken it as Superman is applying pressure by his relatively tiny hands when he lifts them.