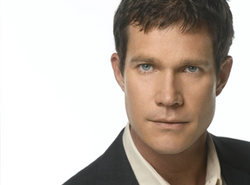 Variety reports that Nip/Tuck’s Dylan Walsh has been cast in the title role in Screen Gems’ upcoming remake of Joseph Ruben’s The Stepfather, with Sela Ward and Penn Badgley as the unwitting family he marries into and eventually terrorizes.  Hang on for a second while I try and muster up some enthusiasm for this…

Another day, another pointless remake.  I’m starting to wish that the writer’s strike goes on for months and months so that none of these movies will ever get made.  I’m especially miffed on this one because the original Stepfather is a terrific movie that deserves to be seen by more and more people.  Its star, Terry O’ Quinn, is now more popular than ever thanks to Lost and the fact that the film’s real-life inspiration (New Jersey murderer John List) was caught after the film’s release.  But it’s not even on DVD, so whenever I tell people who haven’t seen it how great it is, I’ve got nowhere to direct them to a copy.  What a shame.

Making matters worse is how the Variety piece quotes the producers by saying that the new version will be "more of a Hitchcock-style thriller", proving that they never saw (or got) the original, one of the smartest thrillers of the last few decades and one of the few worthy of comparisons to Hitchcock.

Good luck to Dylan Walsh.  If he can come up with something as memorable as Terry O’Quinn did, he’ll have really earned my respect.