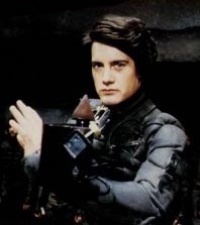 As a genre, science-fiction is filled with cliches, but of all of them — from the bumpy-headed humanoid aliens to the robots who lustily pursue busty shrieking heroines to magical FTL technology — none is seemingly so ubiquitous as the tiresome Messianic Protagonist.

As the Fantasy and Sci-Fi Lovin’ Blog points out, sometimes, it seems like you can’t even pop a sci-fi movie into your DVD player or crack open the spine of a sci-fi novel without running right into some fruity Jesus of the Stars. Just off the top of my head, here’s a quick list:

1) Superman in Superman Returns: so overtly messianic that a CGI Marlon Brando even paraphrases John 3:16 during the film’s trailer.

2) Neo from The Matrix

4) Paul Atreides in the Dune series

These characters are all united in a positively maudlin over-usage of ham-handed Christian symbolism. Their comings were usually foretold in ponderous, badly written "prophesies." They all have supernatural powers that allow them to perform miracles. And so on.

Given how influenced by Christianity our culture is, it’s no surprise that the Jesus story would so uniformly propagate our genres. And, as ideas go, Jesus in Outer Space, Fighting Aliens isn’t that shabby.

Can you think of any other Messiahs in Sci-Fi? Let us know in the comments.