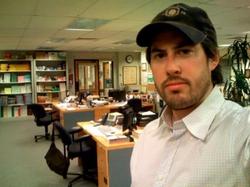 Jason Reitman will be directing Jennifer’s Body, the humorous horror film that will star Transformers actress Megan Fox. According to Variety, ‘Body tells the story of a cheerleader who is possessed by a demon
and starts feeding off the boys in a Minnesota farming town. Her plain Jane best friend must kill her, then escape from a
correctional facility to go after the Satan-worshiping rock band
responsible for the transformation.

"’Comedy and horror have always been inescapable cousins,’ Reitman
said. ‘They both draw a similar type of storyteller, one who wants
to manipulate the audience. Whether you want to make an audience
laugh or you want to make an audience freak out, you’re looking for
a similar firsthand relationship with the viewer where you are
pushing them to react.’"

Reitman is the son of Ivan Reitman, and Jason certainly must have gotten the horror bug form his Dad, who produced Cronenberg’s Shivers and Rabid (along with Howard Stern’s Private Parts). Reitman, the younger, has his own production company, Hard C, which will start film production later in the winter. Reitman’s Juno, a highly-praised coming of age comedy, has a ton of buzz and will open in December. Dude also has a terrific blog which is thoughtful and funny. Can he scare us and make us laugh with Jennifer’s Body? I’ve got a feeling he can.