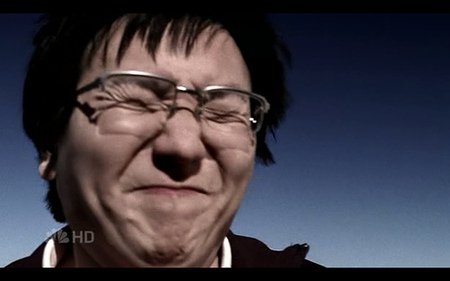 People Magazine is taking an unexpected approach to its annual “Sexiest Man Alive” list in 2007. Usually, the criteria for being the sexiest man alive has something to do with quivering, well-defined pec, washboard abs and dimples like ice pick stabbing scars. This year, however, People has progressively decided to paunchy dorks on their list: Heroes‘ own Masi Oka (Hiro Nakamura) somehow made the cut.

Admittedly, I’m not a particularly good gauge of other men’s attractiveness. Blame the modern heterosexual male’s usual head full of absurd psychological baggage: there should be no reason in the world why I can’t look at another guy and go, “Yeah, he’s a looker” but I’m like a sitcom character that way. If I do that, I might find myself tumbling right down the slippery slope, only to lose consciousness and wake up, days later, in the hedonistic underworld of Haight Street, covered in sequins and feather boas and smelling of another man’s Axe Body Spray.

Still: if being a flabby, short nerd with glasses and a bad fashion sense is all that it takes to get on People’s Top 10 Sexiest Men Alive List, I want my trophy and my bottomless hot tub full of promiscuous bikini bunnies, stat. Granted, unlike Masi Oka, I’m not Japanese, but I am European, which is even sexier… in men, if not in women. I even have the same superpowers: like Hiro Nakamura, I can stop time… in the bedroom. Ladies, you’ll have to decide for yourself if that’s a good thing.