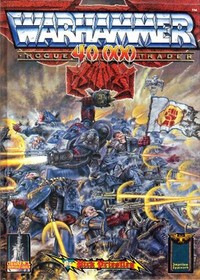 The dark ages at the end of the universe. A group of space marines, an anachronistic combination of genetically enhanced super-soldiers and fanatical medieval knights in fervent servitude to the God-Emperor. An endless horde of strange alien creatures and civilizations to fight.

That’s the setting of the Games Workshop’s tabletop game, Warhammer 40,000, and it would make a crackerjack sci-fi film. Unfortunately, we won’t see one anytime soon: even though a fan production called Damnatus was filmed by a group of German fans on a paltry budgets of 10,000 euros, the Games Workshop has denied them the right to show it to anyone.

I’m really sympathetic to both parties on this one. Any fan that puts their money and time into creating an in-universe work has my admiration, if not for their talent then at least for their passion. But fan works like this often put creators in difficult positions, where they have to ruthlessly stamp down on the very fans they most love to protect the IP as a whole.

In this case, the Games Workshop simply can’t allow Damnatus‘s makers to show their film, because it was produced in Germany, which means it is protected by German copyright law which does not allow copyright to be transferred. In other words, if the Games Workshop allows this film to be distributed with their knowledge, it could be used in court to prove that they have given up their rights to the Warhammer 40,000 IP, which would pretty much sink their business.

At the end of the day, any fan needs to think about things like this before monkeying around in someone else’s IP. But Warhammer 40,000 is a cool enough setting that I’m depressed not to be able to see even a group of fans budget-rate interpretation of futuristic space marine warfare.