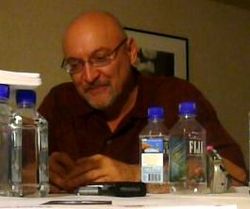 Here’s the thing about movie junket days. You’re often thrown
in with a group of journalists who aren’t prepared or monopolize the
conversation or just aren’t that smart. Thankfully, beyond the roundtable, I was able to procure a
one-on-one interview with one of the finest directors working today, Frank
Darabont, the director of The Mist,
which hits theaters on November 21st. The adaptation of the Stephen King
novella is so moving and shocking, it’s sure to be a movie that will be
remembered and talked about for years to come.

When I first met Darabont at the roundtable discussion that
preceded the one-on-one interview, he appeared jolly and affable and happily
enthusiastic. But in the one-on-one, I found a deep thinker concerned with the
problems of authority, politics and religion with which our society must deal
in this crazy, new century of war. More than scary monsters, The Mist is about the horror of
frightened, trapped humans, kind of in a Lord
of the Flies way. In this, the first of a two-part AMC exclusive interview, Frank Darabont
talks about how the landmark horror movie was made … and why. Enjoy.

HG: This is a pretty gritty, quick shoot that you’ve done
with The Mist.

HG: What horror films that were gritty, fast shoots do you
also like?

FD: The most emblematic would be Night of the Living Dead, the Romero picture. God, I love that.
Talk about a groundbreaking film. It’s hard to grasp now how groundbreaking it
was considering that it’s so often imitated now.

FD: I love 28 Days
Later. In fact, that was very inspiring to me in terms of saying, “Screw
it. Let’s just make a good, low-budget, character-driven horror movie. Look
what Danny Boyle did with very limited resources. Very inspiring.

HG: You’ve had The
Mist under option since 1995. Had
you wanted to do it at another time? Why do the film now?

FD: It was one of those things that I got the rights to and
then you wind up balancing obligations and some things go on the back burner
and simmer. And some things go to the front burners because, OK, we gotta cook
this now. Other opportunities arose during that time: The Green Mile and The
Majestic, (for me) as a director. I was doing a lot of work as a
screenwriter, a hired writer during those years. And it’s easy for 13 years to
go by: it really is. I mean, you do Green
Mile and there’s two years right there. So you’re always sort of balancing
projects, waiting for the right time. It felt like the right time to do this
for a whole lot of reasons.

HG: When did you write the script?

FD: Last year, sometime. It really was, Let’s do it. Let’s
go for it. That’s really the way most of my projects have come about. Shawshank and The Green Mile were both the same thing. I wrote the scripts, set
‘em up and boom, made ‘em. I wish they were all that easy. The rest of the
time, the bulk of the time, is spent trying to get something made, trying to
make headway. I’m not alone in this. I know filmmakers who’ve had their projects
for years and to try to break through is really tough.

HG: Oh, man, yeah. I write books from time to time and
sometimes, the things you really want to do are the things they really don’t
want to do, saying it’s not the right time.

FD: The truth is, it’s never the right time for anything.
They’ll come up with every excuse in the world to try to stop you from doing
what you want to do. And that’s the inertia, the unstoppable force, the
immovable object you have to overcome. It ain’t easy. I think the only person
who operates with impunity in our business is Steven Spielberg. He’s certainly
earned that right to be unimpeded. But I bet even he, once in a while, can’t
get going for whatever reason.

HG: I was frightened at various times during the movie. But
there were point that the sounds scared me, too. Can you explain how you do
that?

FD: It starts off on the stage and on the set. You sense an
opportunity to pull a fast one on the audience through the sound design and the
sound mix process. For me, I really wanted a movie that depended as much on the
silence between the sounds and the words as on the noises. It was a very
interesting bit of a learning curve for my sound guys. Today’s movies, it’s all
this sort of Michael Bay approach which is
make it as loud as you can as often as you can. From the very earliest moments,
I said, Guys, you really have to start thinking that when it’s quiet, it gets
even more unnerving, more frightening. It can unnerve a viewer in a way that
just a bunch of sound or just a bunch of music doesn’t. I really love how this
movie just sometime winds up absent of sound and then gives you the opportunity
to do the oldest trick in the book, which is to go ‘Bang!’

My favorite moment of this entire experience was when we
were test screening this movie for the very first time in New Jersey, maybe a month ago. And Stephen
King flew in for this test screening. We invited him to come. I was sitting
right next to him in the theater. And there’s this one moment where things are
quiet and everyone’s sort of waiting for everyone to get back from the pharmacy
and there’s nothing happening for a long moment. Well, Bill Sadler hits the
door screaming. Stephen King jumped three feet into the air! And then he
scrunched back down. And I thought, I scared King. I rock.

HG: You have a stunning ending with The Mist that we won’t talk about. But did you have to fight to
keep your ending?

FD: Once the commitment came from Bob Weinstein and
Dimension to make this movie, no. It certainly was a discussion at a certain
point because reading it and seeing it are two different things. And when they first
saw the movie, they went, ‘Geez, are you kidding me?’ I said, ‘Well, that was
in the script.’ They said, ‘Well, I know it was in the script, but I didn’t
know it would be this potent. You sure you want this to be the ending?’ ‘Yeh, I
do.’ And I have to say I really have to hand it to Bob (Weinstein). He’s as
good as his word. He’s been incredibly supportive. And he’s really behind the
movie. I have to thank him for that.

FD: The tradeoff was that I had to make it on a very low
budget. We had a quick schedule. I had people offering me more than twice that
budget with the strings attached that I have to change the ending of the movie.
And I thought, No. Then I don’t want to make the movie. I’m too old to sell
out. People think I’m bullheaded or something. But I’d rather have made it as I
did with less than half the money and conditions of extreme time duress. But I
got to make the movie I set out to make. I wouldn’t trade that for anything.

HG: I hope it doesn’t sound like I’m overblowing it. But I
think that’s why the film is going to be remembered. I read the book a long
time ago and forgot much of it except to say now that I liked it. But when you
redid it, all I could say (when I saw it) was Man, they did that.

FD: (Laughs) They’re out of their minds.

HG: I went home and told my girlfriend, I don’t think I’m
going to sleep tonight. This is going to stay with me.

FD: Well, this is horror. You read it and you’re horrified.
Well, isn’t that the point of making a movie like this?

HG: Did you read (Stephen King’s) Danse Macabre? Where does this fall? Is it terror? Is it horror? It
it all that and more?

FD: Yes, of course, I read it. Oh, gosh. I’m probably not
the guy to judge. And I’m not being coy. I don’t know that it’s up to us to
assess our own films. I think that’s probably for posterity. I couldn’t have
told you that Shawshank Redemption
would be this incredibly embraced and beloved film. All I know is that I set
out to make the movie I made and was proud of the result. It then belongs to
the world and they make of it what they will. Some are beloved and some aren’t.
You do the best job you can. I just want to make a move that counts, that isn’t
like everyone else’s movie, that isn’t part of some formula that’s being
offered up by Hollywood.
I want to have a voice as a filmmaker that is my own. That may be becoming more
difficult as I go along. I’m trying to stick to those guns. But it’s really up
to the people to decide what they think of it. Do you love it? Do you hate it?
It’s really up to you to decide.