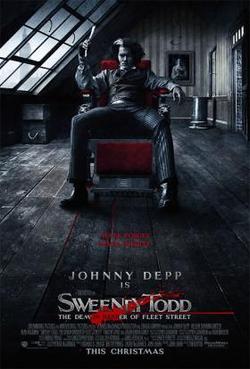 As buzz builds for Burton’s and Depp’s Sweeney Todd: The Demon Barber of Fleet Street, the movie studio continues to add nuggets of interest to the MySpace page. Yesterday, Monsterfest offered up a song by Crooner Depp. Now comes the video. In it, when asked by Burton if he could sing, Depp says, "I don’t know." He pauses, then, gamely says, "I can try." Then we see a ski-capped Depp in the recording studio, belting. Cut to an actual scene from the movie itself with Depp as Sweeney singing and threatening Helena Bonham Carter with his blade. Depp has a big voice, although he himself would admit it’s not that melodic. Yet combined with the movie footage, I say the song works pretty well. It all goes to prove that movies are never one piece of the puzzle apart from the full and completed puzzle itself. What say you?