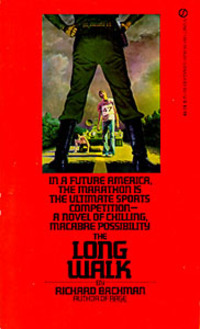 Multiple Academy Award winning director Frank Darabont seems to be spouting off to the press a lot lately. Yesterday, he announced that it was 90% probable that he would be making his next movie an adaptation of Ray Bradbury’s Fahrenheit 451. And today, he’s talking about doing an adaptation of the best of Stephen King’s Bachman Books, The Long Walk. The guy certainly has his schedule full of sci-fi movies he’d like to do.

I’ve long wanted to see a film version of The Long Walk, which is probably one of my favorite Stephen King novels. The novel takes place in an alternate future, where a despotic and totalitarian American government arranges an annual walking contest. 100 boys set out walking from Van Buren, Maine and must continue to walk at a speed of four miles an hour until all but one stops walking. The rub? Walkers who stop are shot dead on the spot. The last man standing has his every desire taken care of by the government for the rest of his life.

It’s a truly bleak novel that is a hard pitch to movie studios. After all, most of the book is just a bunch of boys walking and talking. Still, Darabont seems to have a good handle on how to film it: he seems to envision a ragged edge to the cinematography. I imagine a hand-held camera approach similar to the one that Alfonso Cuarón adopted for Children of Men would be appropriate here.

The Long Walk could be a powerful film: it takes the concept of Nazi forced marches and applies it to notions of American totalitarianism and athleticism. I don’t know if Darabont is the man to film it, but he certainly has enough history with Stephen King adaptations. Of course, this novel — more so than any other book by King — would require a very different touch; having adapted King’s work before, in this context, may not be a good thing.