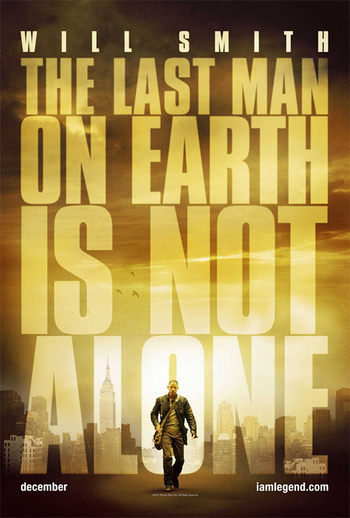 It’s now just two weeks and one day until the December 14th release of I am Legend, the new adaptation of what many consider one of the best science fiction/horror novels of all time. (That includes Stephen King and Frank Darabont, as you can read in this Scanner blog post.) The novel, or novella depending on how you define the two (I have a BA in English and I have no idea what the difference is other than novellas tend to be shorter) was written in 1954 by Richard Matheson, one of the busiest and best writers of his era. Consider this partial list of films he either wrote or which were adapted from his stories: The Incredible Shrinking Man, What Dreams May Come, Trilogy of Terror, Somewhere In Time, The Legend of Hell House, and The Night Stalker, not to mention some of the better Roger Corman Edgar Allen Poe films and some of the best episodes of “The Twilight Zone,” including “Nightmare at 20,000 Feet. The Box, the upcoming film by Richard (Donnie Darko) Kelly, is also based on a Matheson story.

One reason fans of the book are so eager to see the film is that we’re hoping it will be done right this time. This will be the fourth time it has been brought to the screen. Matheson himself did the screenplay for the first and so far best, The Last Man on Earth (1964), though he had his name taken off the credits because he didn’t like the rewrites. There are numerous versions of this Vincent Price starrer on DVD (it’s in the public domain), but look for the double feature disk with Panic in the Year Zero: not only is it the best quality, it also features an interview with Matheson, who talks about all the reasons he doesn’t like the movie.

The second version was 1971’s The Omega Man, with Charlton Heston. It’s substantially different from the book, and while the film has its fans, I’ve never met anyone who considers it a good adaptation. (It has just been issued in Blu-Ray and HD, so you should be able to find it on your video store’s new release rack.)

Also on the new release rack is I Am Omega, which is less a remake than a rip off conveniently released to coincide with interest in the Will Smith movie. It stars Mark Dacascos – need I say more?

As for the new one, I’m desperately trying to avoid reading spoilers, of which there are as always plenty on the web, based on readings of the script or early test screenings. The director is Francis Lawrence (Constantine) and the credited screenwriters are Akiva Goldsman (The Da Vinci Code I, Robot, Lost in Space) and Mark Protosevich (The Cell, Poseidon). None of which, to be honest, gives me a great deal of hope. Still, you never know—Sci-Fi Claus may strike a few weeks early this year.