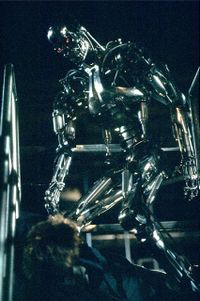 Ain’t It Cool News — that last bastion of ignorant neck beards inhaling deep the flatulent scent of films soon to be squirted out of the sphincter of Hollywood, then pretending they smell of posies just because some hot PR girl who secretly hates them is wearing the scent — sometimes, through random chance in a Godless universe, manages to light upon a rumor that isn’t just rabid fanboy speculation.

This probably isn’t one of those times. According to AICN, Warner Brothers has found their John Connor for the awkwardly titled Terminator sequel, Terminator Salvation: The Future Begins, and that John Connor is Christian Bale.

Arching my eyebrow into a furry, cynical halo hovering above my head, I’m going to just go right ahead and say “no way.” Terminator Salvation has all the hallmarks right now of a budget, cash-in sequel. It’s being described by Warner Bros. as “the same scope of story as Terminator 3…” done with half the budget. If you saw Terminator 3, that is a big warning signal: I liked T3, but it was undeniably a small, cheap-feeling film compared to T2 or even T1.

I just can’t see why Bale, getting major exposure right now as Batman and his serious method performances in The Prestige and The Machinist would take the role in a film that is doubtlessly going to be pretty mediocre. Then again, maybe I’m wrong: Christian Bale has done his share of crappy sci-fi. Reign of Fire or Equilibrium, anyone?