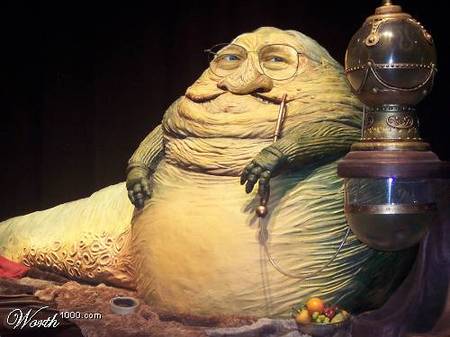 There’s a famous series of Saturday Night Live skits based upon the premise of other famous actors auditioning for Star Wars‘ iconic roles. Kevin Spacey as Christopher Walken as a smug, herky-jerky, wildly gesticulating Han Solo. Richard Dreyfuss as an even more annoying and nasally C-3P0. Walter Matthau as a cigar-chomping, big-shnozzed Obi Wan. And so on.

The latest Worth 1000 Photoshop contest takes that concept and runs with it. Angelina Jolie and Brad Pitt become Princess Amidala and Anakin Skywalker… certainly an improvement on the wooden thespians who actually did play them. The Pope makes both a handsome Yoda and a despicable looking Emperor Palpatine. Dick Cheney as Jabba the Hutt is probably my favorite.

There’s a high signal to noise ratio, where signal are competent, clever entries and noise are Photoshops of the most abject incompetence. But the incompetent ones are somehow more fun. I’m also impressed by the size and scope of the Mr. Bean Internet fan club: by the time that all the entries are done, Rowan Atkins has somehow been transmogrified into every single character in the Star Wars sextet.