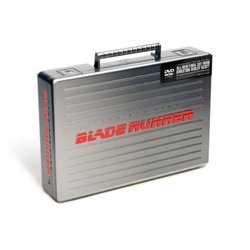 Will there be a sequel to Blade Runner? If there’s a movie that ranks high on the list of films that should not be—could not—remade or sequelized, this one is it. Still, giving the enormous popularity of the title, and the excitement over the upcoming five-disk Ultimate Collector’s Edition, you just know that and such ideas are being given some extra attention lately.

In an interview with Skewed & Reviewed, Paul Sammon, author of the book Future Noir: The Making of Blade Runner (an updated edition of which will be published on December 13) says that Ridley Scott is “not loathe” to doing a sequel, though the years since the original are a problem.

Sammon also says, “There is a new rumor that one of the powers behind the film is soliciting sequel ideas to the film. My take on it is that often with sequels you get diminishing returns and that it might be a good thing to leave the film as it is.”