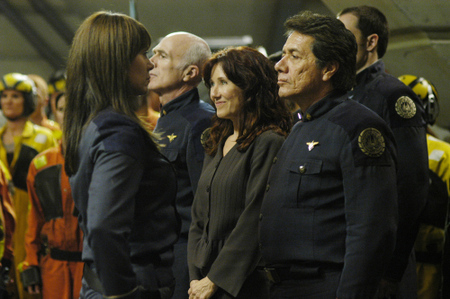 Although it’s been available in the more nefarious alleys of the Internet for weeks, Battlestar Galactica: Razor finally aired for the first time over the weekend.

There was a lot of hype on this one: a stand-alone film detailing Admiral Cain and the Pegasus’ hopeless and isolated survival after the destruction of the Colonial Fleet. The Pegasus arc of BSG‘s second season were the best episodes the show ever produced. So how did Razor hold up under the scrutiny of high expectations and a fantastic pedigree? My spoiler-filled review, after the jump.

In short, I loved it. Where as Season 3 was a plodding disappointment, filled with limp stories of political squabbles and spiritual hogwashery with virtually no forward momentum, Razor is a return to the taut, thrilling pacing of the Second Season, where tensions were high, supplies were low and virtually everyone was about to crack.

Perhaps the biggest disappointment of Razor is that it doesn’t concentrate as much on the backstory of the Pegasus as it should, spending far more time in the present day flashing back to already well-known moments in the Pegasus’ verbal history as appropriate. It works, but it’s not quite the story of the Pegasus from Attack on New Caprica to Encounter With Galactica that everyone was hoping for.

What Razor does well, though, it does really well. The flashbacks to the Pegasus work, even though we already know many of the events, and accomplishes some of the most skillful, humanizing ret-conning in sci-fi television history. For example, Admiral Cain’s romantic relationship with the Gina goes a long way towards explaining her bitter, personal, inhuman hatred of the Cylon. It makes all of the long, lingering looks Cain directed towards a tortured, beaten and raped Gina through the glass of the brig in the second season episodes mean so much more. Similarly, Cain shooting her XO through the head when he defies a direct order is made all the more poignant by the knowledge gleaned from Razor that they were personal friends.

It’s not all depression, though. The return of the original, 70’s-era Cylons is great fun… and somehow they manage to look even cooler than Moore’s “re-imagined” Cylon Centurions.

There’s some inconsistencies. Adama’s flashback is ultimately pretty boring, and some of Cain’s actions — like ordering a suicide attack on the Cylons moments after delivering a rousing speech on how she won’t throw lives away in vengeance — make little sense. I hope these will be rounded-out in the extended DVD edit.

But ultimately, these weak spots are pretty minor, and Razor as a whole benefits so enormously from the presence of Stephanie Chaves-Jacobsen’s Lt. Kendra Shaw, who is just incredible. BSG’s characters have gotten weaker and more wishy-washy over the last three seasons, and it’s a delight to see a new character enter who is as tough-as-nails and would sooner ram her fist down Starbuck’s throat then put up with any of her crap. Perhaps that’s ultimately the biggest disappointment of the film: it seems tragic to come up with such a fantastic character and cast such an amazing actress to play her, then kill her off in the final reel.

I’ll end my gushing: Razor’s great, and it’s small problems I expect will be corrected by the extended cut, which is due out on DVD on December 4th. If you missed it and if you’re a BSG fan, pick it up when it hits: you won’t regret it.