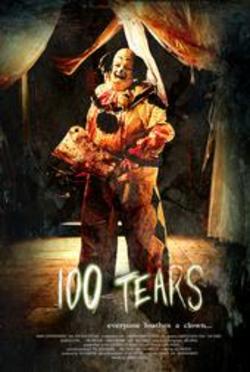 Even though 100 Tears is about a crazed killer clown, director Marcus Koch isn’t shedding the proverbial tears of a clown now that the indie film’s gotten an NC-17 rating. He tells Fangoria, "Oddly
enough, the guy at the
MPAA who called us told Joe [Davison, writer/producer/star] that he
doesn’t think we should cut anything. and that it’s one of the best
non-studio low-budget films he had seen. So we’re going to fight to try
and keep it uncut; after all, it isn’t going theatrical.”

A look at the trailer on MySpace shows nothing violent in the first half. But then, well, things get really gory. There are intestines, grossly hanging out like sausage, giant cleavers cutting heads off, blood spattering — all the things you’d expect from a straight-to-DVD horror pic. But this one also looks like it’s got some decent dialog. Here’s hoping Koch can wangle a deal and then move on to his next project, BabyDoll.