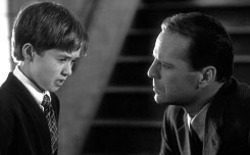 What spot would that be?

The spot where it happened.

The anchoring event: the Bad Thing around which the rest of the events in the film will arrange themselves like garnish around a main course.

Sometimes there is more than one such event – as is the case at the Overlook Hotel, where Mr. Halloran explains to Danny that “a lot of things happened right here… and not all of them was good.”

Sometimes we see the event or events in question – either whole or in flashes — at the start of the film. Sometimes we don’t see them till later on. And sometimes – as in The Blair Witch Project — we never see them at all.

But however much or little we see of the Bad Event or Events, horror movies usually specify the PLACE where these events happened very carefully. “That happened here, at Coffin Rock,” says Heather in The Blair Witch Project, perched amid a gloomy but not particularly threatening bend of a Maryland creek. That’s the thing about the Bad Place: when you go back there later, it doesn’t really look all that scary. In fact, it looks downright normal. The bathroom in Cabin One doesn’t look horrible at all when Marion Crane’s sister and boyfriend investigate it following her disappearance in the original Psycho. Why should it? Norman’s cleaned it all up – even down to removing the shower curtain.

Speaking of Bad Places in Hitchcock: North by Northwest isn’t a horror film, but early on in it Cary Grant does a horror-movie-worthy job of capturing the helplessness that the witness of the Bad Event suffers when he takes his disbelieving mother back to the mansion where he was held hostage the evening before. Don’t you understand? the witness of the Bad Event shouts, or at least feels like shouting. This place isn’t an ordinary place at all. Awful things happened here!

It’s this same helplessness that Haley Joel Osment’s Cole feels in The Sixth Sense. Cole sees places where Bad Things happened just about everywhere he looks – and that, ultimately, is the real point. Horror films suggest to us that the entire world is full of places where X marks the spot. No spot on the globe, no corner of any house is 100% guaranteed to be normal and harmless, because we can never be sure that something very far from normal hasn’t taken place there at some point in the past.

“Is there something bad here?” Danny asks Mr. Halloran during their discussion of the Overlook and what might have gone on there in the past.

You can count on it.