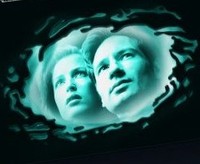 In X-Files: The Definitive Collection, 20th Century Fox has announced the ultimate DVD collector’s set for X-Files fans. All 9 seasons, the theatrical film and nine hours of bonus materials in one ultimate fan set.

It’s quite a good set, and I’m tempted. But to be totally honest with you, I suspect that my fondness for the X-Files is purely nostalgic. And a part of me suspects the series is almost single-handedly responsible for everything that’s wrong with current sci-fi television.

There is a certain truth to the fact that the Networks’ eschewing of the latter led to more dramatically satisfying television. But the constant carrot of a solved mystery — the LOST effect — was pretty much pioneered by Chris Carter during the X-Files.

During the show’s run, Carter promised it was all running towards some overarching conspiracy, but the revelation of that conspiracy never came. Which leaves my fondness for the show basically limited to appreciation for some of the better episodes and the slow burning sexual tension between Mulder and Scully. I almost don’t want to re-watch the show, lest a more mature critical acumen ruin the memories I have of the latter.