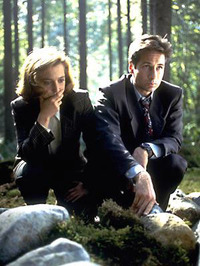 The looming Hollywood writer’s strike is causing panicky studios to rush all sorts of bizarre projects into production, but none of them is so surprising to me as X-Files 2.

Don’t get me wrong: I loved the X-Files when it was on. But in retrospect, it was the first sci-fi show to really be guilty of the narrative wankery of shows like Lost. Chris Carter assured us each and every week that every episode, every unexplained mystery, was leading up to some ultimate denouement, where everything would tie together and ultimately make sense. But after ten seasons and a feature film, that revelation never came.

And I’m just as skeptical that it’s coming in X-Files 2: there’s simply too many loose ends to tie up. Still, according to David Duchovny, the project’s been fast-tracked and will begin filming in December, along with Gillian Anderson.

I’ll probably go see it: it feels like a sequel made five years too late, but for me, the show was always about the smoldering tension between Mulder and Scully anyway, with a liberal slathering of alien goo along the way.