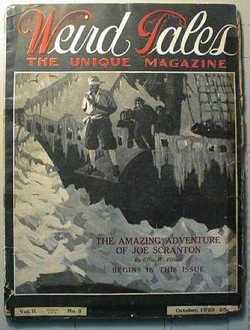 Weird. Funny. Strange. As in a radio station going off the air all of a sudden. As in Tippi Hedren pointing out to Suzanne Pleshette that the gull that crashed into her house in The Birds couldn’t have lost its way in the dark, because there’s a full moon out. Or as in the guy throwing the stick for Pippet the dog in Jaws suddenly… not being able to find him anymore. That’s funny. Pippet was a big dog. Where could he have gone?

When characters in horror (or science fiction) films run into something weird, the first thing they try to do is pretend that it’s not there. How COULD it be there, after all, when it doesn’t fit into their model of what the world is?

The explanation, of course, is that their model is WRONG. The world, it turns out, is a super-weird place from top to bottom, and it’s the job of the protagonists of horror films to learn that fact the hard way.

When I was a kid, one of my favorite things about seeing a horror movie in a theater was that moment of disorientation when the credits rolled and I got up from my seat and walked out into the open again. There it all was: good old solid, reliable, ordinary existence.

Or was it? After all, I’d just spent all that time shaking my head at how stupid the people up on the screen were for not understanding what kind of place the world really was. So… could it be that maybe – just maybe – I was doing the same thing? That basic question lies at the heart of all my favorite horror movies. The best of these movies not only throw the people in them into doubt about the true nature of the world: they throw me into doubt about it too. And for some strange, odd, weird reason, I love them for doing so.