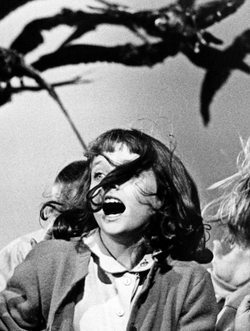 Ask a horror fan for a list of their favorite scream queens, and you won’t necessarily find Veronica Cartwright on it.

But you’d find her on mine. I first met Veronica as a kid, staying up late to watch The Birds (as perhaps one or two of today’s kids did on AMC this past weekend). In The Birds Veronica plays young Cathy Brenner, Rod Taylor’s pleasant but ever so slightly whiny little sister. The classic Veronica moment in the film comes just after the big attack on downtown Bodega Bay, when Mitch and Melanie go up to the schoolhouse and find Suzanne Pleshette lying dead outside while Veronica cowers in one of the windows. Mitch goes in and gets her, and as they all drive back to the Brenner house Veronica haltingly, half-blubberingly tells the tale of how Pleshette’s character, Annie, pushed her into the house only to be done in by the birds before she could make it in herself.

That halting, half-blubbering delivery – call it the Cartwright Whine — became Veronica’s trademark. Sixteen years later, a full-grown Veronica delivered it again in Philip Kaufman’s version of Invasion of the Body Snatchers. Here as in The Birds, she plays a character that isn’t so much terrified by what’s going on around her as really, really disappointed. When Jeff Goldblum (Veronica’s husband in the film) almost gets taken over by a pod person at the mud baths the couple runs, Veronica’s voice (“Oh Jack, it opened its eyes!”) has the same breathy, grossed-out, stressed-out, moist-and-weepy quality that it had back when it was mechanical birds, not pod people, that she was complaining about. And once again, though it’s slightly annoying, it’s also 100% believable. You not only see how crushed Veronica’s character is by how badly everything is turning out — you FEEL it.

One year later, when the fully-incubated monster with the silver teeth and the bad under-bite bursts its way out of John Hurt’s stomach in Alien, Veronica is once again on hand and once again ready to let us know how bummed out she feels. At the exact point when the gore-coated little alien breaks into sight, Veronica utters the simple line: “aaugh, God…” And good as the scene would be without that little touch, it’s Cartwright’s Whine that brings it over into great.

Don’t get me wrong. Veronica’s a great screamer too (as she proves in both Body Snatchers and Alien). But it’s when she gets whiny that she really shines. When you hear the Cartwright Whine, you know that things aren’t just bad and aren’t just scary. They’re also just downright disappointing.