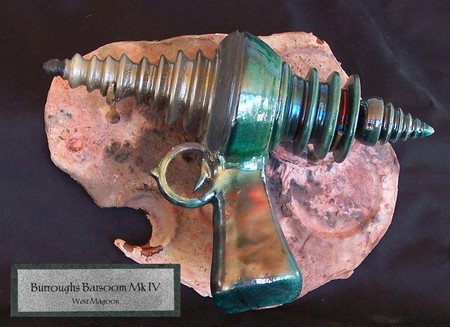 What an absolutely incredible idea: ceramic ray guns, designed to look as if they’ve been unearthed, half-fossilized, from a long buried UFO crash site.

Raku Ray Guns are one-of-a-kind ceramic sculptures made by West Magoon. They are inspired by alien technology unearthed at a secret UFO crash site, known only to a tribe of Wyoming Hill People…

Each sculpture is hand-built by assembling several parts that have been made on the potter’s wheel. All of the Ray Guns are glazed and fired using the low-fire raku firing technique. The sculptures are pulled from the kiln while the glaze is red-hot and molten and placed into a metal barrel filled with newspaper which is then covered. This smothers the fire, which creates a reduction atmosphere, giving the glazes their metallic look.

Each ray gun has the name of a famous sci-fi author or character. As a Burroughs geek, I’m particular to the Barsoom model myself… though possibly not to the tune of three bills.