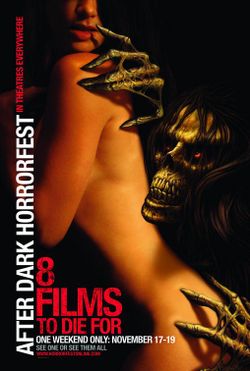 Despite the quality of some of last year’s films, Horrorfest was a cool event. After all, horror movie fans are a cult anyway — knowing trivial facts such knowing who Lorie Strode’s crush is in Halloween and the proper name for all the cenobites in Hellraiser. As if bringing people together to watch unconventional horror flicks wasn’t good enough, After Dark Films turns Horrorfest into an all-out spectacle with the Miss Horrorfest pageant. This year, contestants made their own YouTube videos, and the top eight finalists have been announced by After Dark Films CEO Courtney Solomon, according to Bloody-Disgusting.com

Melissa Jones, Lorrisa Julianus, Erin Nixon Kerrigan, Shannon Lark, sisters Molly and Bonnie Morgan, Jeanette Roberts and Rainey Welch will be cutting through each other to be crowned the queen of Horrorfest this year. To watch all the Miss Horrorfest entries, check out the Horrorfest YouTube playlist.

In true competition style, the contestants will live in a house and endure a series of challenges — all of which will be broadcasted on YouTube. The top three finalists will be announced on YouTube on October 19. You can vote for your favorite on Horrorfest’s YouTube page.