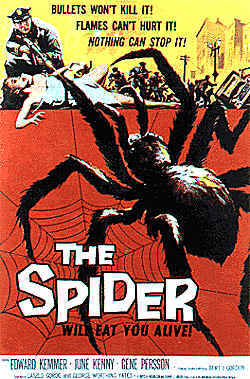 What is it about spiders that makes them so damn creepy? I’m a grown adult of relatively sound mind and body, yet when I find one of the eight-legged little buggers somewhere where it shouldn’t ought to be (i.e., indoors), I tend to turn into Woody Allen in Annie Hall (“There’s a spider in there the size of a Buick!”). The only way I can deal with it is to fetch the vacuum cleaner and hope that it doesn’t get mad before I can suck it into oblivion—the last thing I want to do is make it mad and have to deal with a rampaging spider.

I know I’m not alone in this dread: if a large portion of humanity weren’t freaked out by spiders, there wouldn’t be so many movies about them. Of course, we don’t like to admit we’re so afraid of something that is a tiny fraction of our size and body mass, so the ones that show up in movies tend to be a bit larger. OK, they’re a whole lot larger, like the two-story arachnid you can watch terrorizing a rural town in Earth vs. the Spider, showing on AMC tonight (2:15 am Friday night/Saturday morning).

Also known simply as The Spider, this was one of a number of movies by producer/director Bert I. Gordon. Perhaps inspired by his initials, Gordon specialized in low-budget sci-fi movies about giant monsters and giant people: King Dinosaur (1955) The Cyclops (1957), The Amazing Colossal Man (1957), Beginning of the End (1957), War of the Colossal Beast (1958), and Village of the Giants (1965).

For a change of pace, in 1958 he made Attack of the Puppet People, in which our heroes are fiendishly miniaturized so that normal sized things become giant terrors. Moved into other fields when audiences started to get tired of his patented cheesy special effects (two words: back projection), Gordon made a comeback in the late 1970s with The Food of the Gods and Empire of the Ants, which many consider the worst ever films claiming to have been adapted from the writings of H. G. Wells.