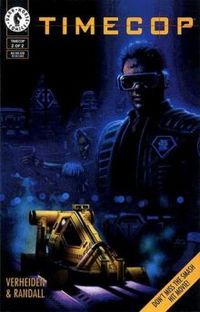 Reboots are all the rage in Hollywood these days, but strangely enough, only successful movie franchises are usually given the treatment. Dark Horse Entertainment? They don’t grok that. Throwing caution to the wind, they have decided to reboot a completely failed franchise by filming a remake of the cheap, early 90’s sci-fi vehicle starring Jean Claude Van Damme, Timecop.

For a movie starring everyone’s favorite Belgian kickboxing midget, Timecop wasn’t too shabby. Jean Claude Van Damme starred as the eponymous character himself. His job was to travel through time and hunt down time traveling criminals looking to change the past. And that’s pretty much all the exposition the movie deserves: it is cheap, enjoyable and pretty forgettable. There’s a lot of sci-fi movies like that.

But bizarrely, Timecop ended up making over $100 million, and Dark Horse — the company that owned Timecop — obviously envisioned a franchise. Unfortunately, those plans quickly disappeared: if you never heard of Timecop television series or the DVD sequel in 2003, it’s not just you. Almost no one has.

Still, I’m sort of charmed that Dark Horse is trying to take a failed franchise and give it a reboot, hoping that it will spark the following they feel the idea deserves. I’m not sure Timecop is worth the effort, but it’s a surprisingly uncynical… dare I say, hopeful… move in an all too mercenary industry.