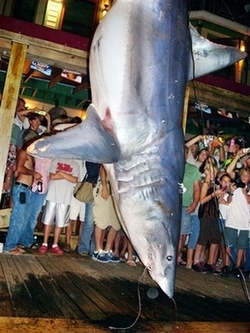 Does horror imitate real-life fears or does it create new fears that are imitated by our own psyches? It’s the age old  "chicken or the egg" question that likely doesn’t have an answer. Take Jaws for instance. The film magnifies our own irrational fears of the unknown, but the ridiculously large shark has more basis in reality than we original thought.

An 844-lb, 11-ft long mako shark hanging from its tail was the center of attention on a crowded dock in Destin, Fla., this past weekend. Using the standard hook, line and rod instead of the harpoon and barrel system, it took six friends over an hour to shark in the Gulf of Mexico, reported Yahoo!.

"It was like Jaws," said Capt. Robert Hill, captain of the 52-ft charter boat.

Luckily, the fishermen didn’t need a bigger boat, despite the shark still weighing 638 lbs after it was gutted. And it’s a good thing, because they couldn’t get the shark onto the boat, so they tied it to the stern with three ropes. It took them four hours to get home, which is about how long it probably took Brody and Hooper to kick their way to the shore.