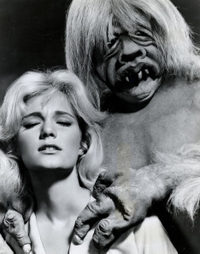 Well, here’s something to look forward to, at least for those of you who figure on being the special ones who won’t have to die and will therefore be around to see the distant future: A British scientist predicts that after mankind reaches its evolutionary peak in another 1000 years, we will start to split into two different species.

According to The Daily Mail, evolutionary theorist Dr. Oliver Curry predicts that by the year 3000 humans will be between 6ft and 7ft tall and will live up to 120 years. Interbreeding among the races will have resulted in a uniformly coffee-colored race of women with “glossy hair, smooth hairless skin, large eyes and pert breasts,” and men with “symmetrical facial features, deeper voices and bigger penises.”

After that, Curry speculates, lowered immune systems due to efficacious medicines and lack of physical exertion will start to turn us weak and child-like. By the year 100,000, humanity may have split into an “attractive, intelligent ruling elite and an underclass of dim-witted, ugly goblin-like creatures.”

Does this sound somewhat familiar? Of course it does—it’s the plot of H. G. Wells’ The Time Machine!

I don’t know what Dr. Curry’s credentials are: maybe he’s just proving that Wells, for whom science fiction was based on sociology, was more prescient than we thought. Still, two things bear noting: Dr. Curry is on staff at the London School of Economics, and there’s no one for putting the cart before the horse like an economist. And his study was commissioned by the British cable channel Bravo. Not to be confused with our Bravo, which is an arts channel, the Brit Bravo is a self-described “televisual broadcaster for the modern gentleman.” In other words, something for the Spike and Maxim audience. Which puts those predictions about pert breasts and bigger penises in a whole different light, eh?