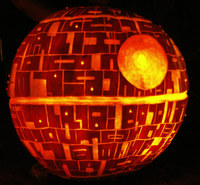 Do you have a feverish intensity for intricate patterns in pinholes on a gourd? A feverish acumen in sawing open a rippled three-dimensional sphere with a tiny, flexible blade? An idiosyncratic intensity for science fiction? My alma mater, Wired.com, is hosting a contest for the best geek jack-o-lantern, and they’ve got some real winners up for viewing.

The Death Star one, pictured above, is probably the most predictable… but predictability is generally what it takes to please the crowd. I find the Death Star jack-o-lantern design ultimately less interesting than what I would do with such a pumpkin. I imagine a fire cracker jammed up its exhaust port, recreating in an expanding supernova of pulpy pumpkin bits the explosion at the end of A New Hope.

It’s not my favorite though. The Pale Man pumpkin (lifted from the most memorable monster design in Gullermo del Toro’s decidedly non-sci-fi Pan’s Labyrinth) is probably the best straight jack-o-lantern design I’ve ever seen. Still, none of the entries can compete with the Remote Controlled Pumpkin Daleks I posted a few weeks back.

Show Us Your Geeky Jack-O-Lanterns [Wired]