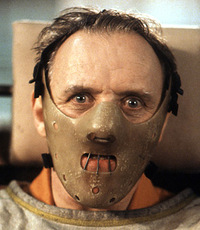 We’ve all wondered while watching The Hills Have Eyes or The Texas Chainsaw Massacre or Hannibal or some other movie about the ultimate taboo, cannibalism—what does it taste like?

Seems an aspiring horror novelist in Mexico City was wondering the same thing. He’s been arrested by the police and accused of killing his girlfriend and eating parts of her. The judge will presumably not show much leniency for the fact that he was working on a novel titled Cannibal Instincts.

Sure, research it important to a writer. But you don’t have to go out and actually do it—that’s what the Internet is for! A few keystrokes in any good search engine would have turned up this recent interview on the topic of what we taste like with Armin Meiwes. You may recall Herr Meiwes as the man who advertised online for volunteers to be slaughtered as part of his interest in cannibalism. (He got several hundred replies, which is the part of the story that always freaks me out.) Interviewed from his prison cell, where he is serving a life sentence, Meiwes described the taste of flesh in some detail, and also admitted that he probably needs some therapy. (If you really want to know, check out the story yourself. Suffice to say that we apparently do not taste like chicken.)