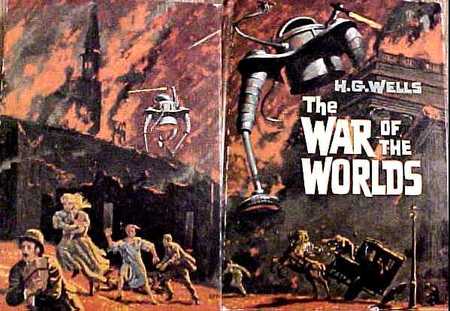 Over the years, H.G. Wells’ blood-sucking Martian Tripods have been visualized by artists and filmmakers in many different ways.

It’s surprising, because what a Tripod is meant to look like is right in the name: a Tripod stands on three-legs. And while Stephen Spielberg got this (and only this) right in his recent remake of War of the Worlds, George Pal had the sheer effrontery to turn his Tripods into cycloptic flying saucers without any servo-controlled tentacles at all when he filmed his version of H.G. Wells’ novel in 1953.

But Pal wasn’t alone: over the years, there have been numerous artistic imaginings of what a Tripod looks like, mostly on the cover of cheap paperback reprints of War of the Worlds. And looking through the collection, it’s surprising how many artists didn’t even bother to make sure their Tripods had three legs.

This gallery of War of the Worlds book covers contains over 300 amazing artistic imaginings of what Wells’ Martians would have looked like. Some of the Martian War Machines are just flying saucers, where as others portray the Tripods as giant robot octopuses or even giant robot cows.

For the H.G. Wells fan, this is a dream cache of tentacled Martian imagery, absolutely not to be missed.