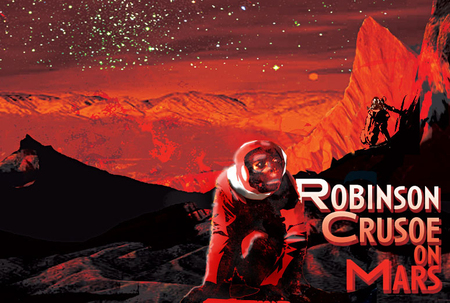 One of the interesting ramifications of the surfeit of DVD releases is that it has accidentally led to a new surge in science fiction illustration. After all, DVDs need covers, and collector’s editions are marketed to completists who appreciate a truly lurid and gorgeous cover. And no sci-fi collector’s edition has a cover more lurid and gorgeous than Robinson Crusoe on Mars.

Robisnon Crusoe on Mars is one of those forgotten classics of the 60’s. Starring Batman’s Adam West, it’s the story of a marooned astronaut on the Red Planet, his companion Mona the Monkey and their solitary adventures exploring the strange and beautiful land in which they find themselves stranded.

Over at the Cozy Lummox blog, Eric Skillman — the Brooklyn-based designer behind many of the covers on the Criterion Collection — discusses his collaboration with artist Bill Sienkiewicz on their edition of Robinson Crusoe on Mars. The resulting cover — featuring Mona the Monkey as foreground scout on an endless trek across the blood red wastes — is one of the most striking examples of modern sci-fi illustration I’ve seen, and Eric Skillman’s commentary on  design considerations are equally fascinating, even as a layman.