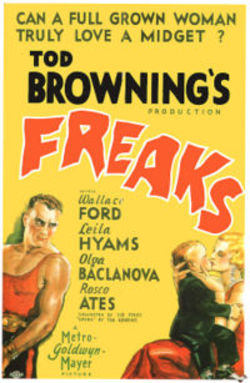 I guess it’s that time of year when everyone makes Halloween horror movie lists.  Today, Canada’s CTV is out with its 10 Most Controversial Horror films. This particular itemization strikes me as being a lot closer to the real deal than that Vampire list I put up yesterday. I mean, this one deals with serious old school films from back in the day, so a fair amount of research and thought went into it. It’s not perfect, but check this out:

Le
Chien Andalou (1929) — I never thought of the Dali movie as
horror.  But then there’s that razor to the eye: perhaps this shocking nightmare of art is the
original slasher film.

Freaks (1932) — Another good
choice. Freaks even has been written about by the late, lamented essayist
Leslie Fiedler.

The
Exorcist (1973) — Maybe the most controversial horror film ever made — at least
as far as the Catholic Church was concerned.

I
Spit On Your Grave (1978) — Not the best film ever made, but so
brutal, it got an X-rating and nearly made critic Robert Ebert ill.

Cannibal
Holocaust (1981)
— So realistic that the director was accused of making a snuff film. It was
supposedly banned in 50 countries.

Silent Night
Deadly Night (1984) — Not sure I agree, but for the time,
a killer Santa was pretty over the top.

House of
a 1000 Corpses (2000) — Zombie told me the studio suits
freaked out at a screening when the crowd cheered at a gory moment and, hence,
they wouldn’t release the movie. Don’t know that a studio shelving qualifies as
controversy, though.

I would add Texas Chainsaw Massacre, a number of Japanese horror films like the hard-to-watch Audition and The Faces of Death series.