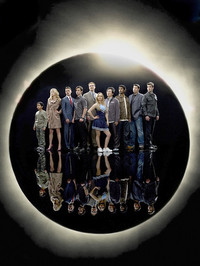 The latest episode of NBC’s Heroes aired last night, largely confining itself to Claire’s attempts to understand the limits of her power, Matt Parkman’s investigation of Kaito Nakamura’s Death, Hiro’s attempts to make Takeo Kensei into the hero the future would have him and Peter Patrelli’s adventures with a gang of ridiculous Irish caricatures in that far-flung Xanadu of the Emerald Isles, Cork.

You can consider this a spoiler post. My scattered impressions after the jump. If you watched it, feel free to drop into the comments and voice your opinion.

• If only that fluffy, rat-like dog had scarfed down Claire’s toe when she cut it off.

• It’s pretty clear to me that the killer in Season 2 is Nathan Patrelli’s Jessica-like mirror double, horribly deformed by the explosion at the end of the first season. The question is how this will be explained: does Nathan have the power-absorbing abilities of his younger brother, or is there some other explanation?

• You can take it from an Irishman: the Irish accents in Heroes are possibly the worst in television history. I have no idea what sort of accent Mr. Fight Club thinks he’s pulling, but he seems just as likely to slip into a Rocky Balboa accent as he is into a tone deaf Irish one. Come on, NBC: aren’t there enough out-of-work Irish actors in Hollywood desperate for booze money?

• Speaking of the entire Cork subplot, since when can Peter use his powers without his memory? The way he currently uses his powers is instinctual, but Season One fairly established that he needed to concentrate on the person from whom he absorbed the power in order to harness them.

• Props to Kring and Co. for surprising me with the Takeo Kensei subplot. It seemed pretty clear early on in “Lizards” that Hiro was going to take on the mantle of Kensei himself, but Kensei’s sudden exhibition of regeneration powers really puts it in another direction. I’m guessing Hiro’s role now will largely be to teach Kensei what it means to be a hero.

• I couldn’t quite tell you the names of the Guatemalan Wonder Twins, since their subplot is still bare bones and lifeless. But the girl’s strange and ichorous power is certainly more interesting than what I was expecting.

Overall, I’m still not quite feeling the same chemistry with this season as I did with season one — it seems like a lot of the powers are being recycled and the series is still struggling to get momentum after the deflation of last season’s finale — but overall my impression of this episode is slightly better than the last one. How’d you like it?