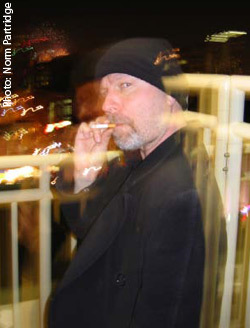 John Skipp‘s got balls, big ones. The horror novelist not only penned the upcoming Jake’s Wake tome, according to Fangoria, he’s also writing and directing the movie based on the book.  Says Fango, "The outspoken horror maven
tells us that over the last 10 years (during which, by most accounts,
he refocused his energies on musical endeavors and his literary output
seemed to wane), ‘I’ve spent much of it studying the filmmaking process
at UCLA, IFP and the Hollywood Film Institute, and I actually directed a 12-minute spec for Jake’s Wake earlier this year.’

"The short was subsequently screened for Re-Animator director Stuart
Gordon, who, according to Skipp, respectfully declared, ‘You’re a
director now.’ Skipp recalls that Gordon’s statement ‘was all the
validation I needed; the feature is in full-on preproduction now, and
that is particularly exciting.’

Kudos to Skipp: he’s like a punky Energizer bunny: he just won’t be stopped. And I love the plot, too: Jake, who’s been offed for doing the nasty with the wrong guy’s galpal, comes back from the dead – thinking he is the Second Coming. At that point, all manner of grim hell is unleashed.