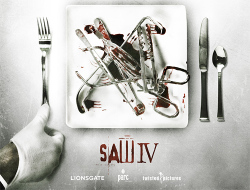 Saw IV opens today, and from all accounts it’s more about the story than the traps.  From what we’ve been reading, the writers say they wrote the dialog first and the traps second this time.

Put down the Hatorade, Saw detractors, though the previous two installments were violent slideshows of creative violence, the first one had some amazing twists and story points that made the reputation they’ve been coasting on, and it looks like this one is a return to that.

Which is not to say the traps are boring.  That push your face into the knives to release the things that are sawing off your wrists trap has been seeping into the corners of my daymares for a while now.  It’s kind of on the periphery of my consciousness maybe permanently.

Anyhoo, here’s the deal.  Many of you, including many of my Brother Bloggers, seem to dislike the Saw series.  Let’s give a voice to those who are into Saw.  It rules the box office every year, so someone’s seeing it and going back for more.  Let’s hear from you.  This comment section is for the Pro-Saw amongst you.  Tell the anti-Saw crowd what they’re not getting.