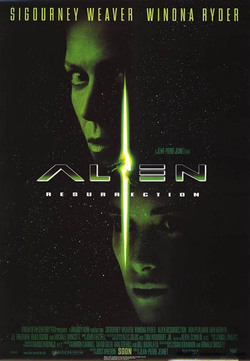 No matter how bad a film franchise becomes, you’ll always find those die-hard fans who support any new slop that is thrown onto the silver screen. Just look at the Saw series — low blow, I know. I, for one, will defend Friday the 13th Part VIII: Jason Takes Manhattan , Hellraiser III: Hell on Earth and Alien Resurrection.

While the ridiculousness of most sequels is enough to get the dumb-enough-to-be-funny award, Alien Resurrection, which airs tonight on AMC’s Monsterfest, is a stylistic experimentation within the Alien universe. While not as creepy as the original or exciting as the sequel, Aliens , Resurrection has style in spades thanks to director Jean-Pierre Jeunet, the mastermind behind Amélie and A Very Long Engagement.

Like David Fincher’s Alien 3 , Resurrection was seized by the studio and stripped of Jeunet’s original vision. Sure, he might be a crazy French-ie — wanting to open the film with a 3 minute shot revolving around an alien-like insect being smashed — but at least he’s trying to spice things up. Luckily, his regular crew of cronies all have major roles — Ron Pearlman and Dominique Pinon.

In this day and age of computer-generated effects, Alien Resurrection still holds up fairly well. It’s definitely a film worth revisiting after being brushed off and forgotten about after its 1997 release.