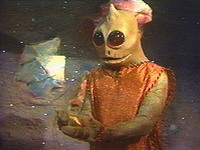 Even if you’re not a fan of movies-based-on-TeeVee-shows, you have to admit, a Land of the Lost movie could be fun. Still not convinced — how about one starring Will Ferrell. (I’m hoping it’s good Will Ferrell, the one who made Elf and Anchorman, not the guy who stumbled through Talladega Nights.) Brad Silberling (A Series of Unfortunate Events) is set to direct.

The big-screen adaptation will be a comedy, but according to co-creator Marty Krofft, “it keeps the integrity of the show” (!?!). Marty also revealed that there will be “50 Sleestaks” (!!!)

The film (and it is a film, not a movie) will take some artistic license — instead of following Will, Holly and Marshall, the movie’s leads will be a disgraced paleontologist, his assistant and a tour guide. Expect obligatory cameos by Ben Stiller, Owen Wilson and maybe Jack Black as Chaka.

Land of the Lost would continue a Sid & Marty Krofft renaissance, as the brothers are supposedly reimagining H.R.Puffinstuff for Nickelodeon.