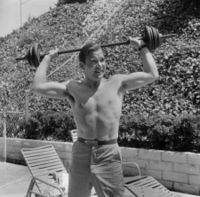 At a certain point in his career — when his face was less jowly, his eyes less bulging and thyroidic, his complexion less raspberry colored — William Shatner was well known for being grim and humorless about his typecasting as Captain Kirk. It’s understandable: like many typecast actors, he wanted a more serious legacy.

How things change. Nowadays, any non-Trek legacy denied him, Captain Kirk’s all The Shat’s got, and so now he has an opportunity to be grim, humorless and, let’s face it, a total dick about being denied a role in J.J. Abrams’ upcoming Star Trek XI prequel.

I’m not quite sure what Shatner expects. Kirk is canonically dead in the Star Trek series, but he’s still whining about not getting a cameo. As he complained to the AP last week, his eyes full of tears, his kielbasa-like lips raspberrying…

"I couldn’t believe it. I’m not in the movie at all. Leonard, God bless his heart, is in, but not me," Shatner, 76, told The Associated Press last week. "I thought, what a decision to make, since it obviously is a decision not to make use of the popularity I have to ensure the movie has good box office. It didn’t seem to be a wise business decision."

I love The Shat, but how clueless can he be? A cameo by William Shatner means absolutely nothing in the quest for good box office numbers. I’d be willing to bet that J.J. Abrams’ name alone has more box office draw than Shatner’s.

Sorry, Kirk. You’re dead. Lay down in your grave with some dignity. And hey, it’s not like you don’t have another legacy to fall back on. There’s always a spoken word Rocket Man tour.