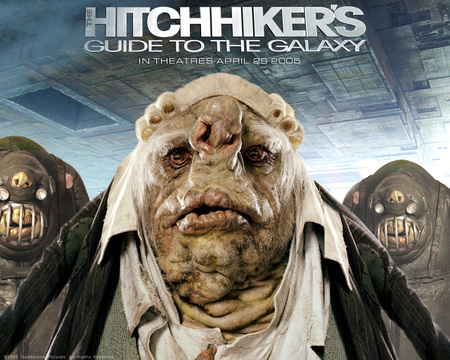 Acolytes of Douglas Adams’ droll and surrealist British wit can take cheer: Martin Freeman, star of the latest and worst attempt by Hollywood to bring The Hitchhiker’s Guide to The Galaxy to the big screen, says there is absolutely no chance a sequel will be made.

“There isn’t [any possibility of a sequel] at this point,” Freeman said. “I found that out from the horse’s mouth, [director] Garth Jennings. I had dinner with him and he said [the first one] just didn’t do well enough.”

Fans of Douglas Adams, enemies of mediocrity and — well, let’s just say it — non-idiots everywhere can breathe a sigh of relief. The first film was just terrible.

I realize that The Hitchhiker’s Guide to the Galaxy had big shoes to fill. But whoever casted that film should be shot. What fan of the book could ever accept Mos Def atonally stumbling through his lines as Ford Prefect like a stroke-victim? Or Sam Rockwell’s tragic turn as Zaphod Breeblebox, transformed from a goofy 60’s swinger type to a loud, obnoxious, yahoo-ing Texan.

Granted, Zooey Deschanel, Martin Freeman and Alan Rickman were all good, but the other two casting choices were so bad (and for such pivotal roles) that it would have taken a real-life Improbability Drive to prevent that film from imploding into a black hole of suckitude.

Martin Freeman: No Sequel For ‘Hitchhiker’s Guide To The Galaxy’ [MTV Movies Blog]