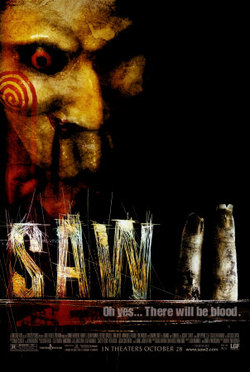 I have seen the future, and it’s not scary. Yes, I know there’s money to be made in them thar Saw hills.  And maybe, just maybe, one of these sequels won’t be drivel. But I can’t help but feel that Lionsgate is beating a dead horse. I mean, Saw III wasn’t so frightening. And I can’t imagine the V and VI, to be directed back to back by Saw vet David Hackl, will raise even the hint of a goosebump on my pale arms (although I am looking forward to gawking at Paris Hilton in Repo! The Genetic Opera for which he’s production designer).

I know, you Saw fans say, don’t go if you don’t like it.  But I keep thinking of all the horror novels and all the screenplays that are piling up on execs’ desks. And I keep thinking, there has got to be some great new film in there.  Something that will scare the wits out of me. Something that will make me say, Boy, that movie was so worth the money.  The only thing that scares me regarding the news of these Saw sequels is the obscene amount of money Lionsgate is going to make off fans who hope against hope that these films will be worthy.  But they won’t be. End of rant.