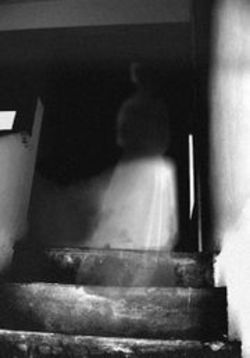 Back when I first came to New York City, I met a stunning redheaded model/journalist from Toronto.  After we started dating, we decided to make the trek from New York to Connecticut because she wanted to see the original Mystic Pizza restaurant.

One the last night of our weekend trip, we stayed in this old, old bed and breakfast from the 1700s. That evening, we had been arguing a bit, a sure sign that the relationship was beginning to wane. So after a few more words, she announced, "I’m going down to the library room to read." That was fine by me as we both needed time to cool down and chill.

So I fell fast asleep on a big, fringe-y Victorian bed. At some point in the next hour or so, I detected a slightly musty odor. At that point, my girlfriend came back into the room and gave me a huge kiss and carefully tucked me in. I felt that the argument had passed and all was well with the world.

In the middle of the night, I woke and kissed my Toronto girlfriend, saying, "That was so nice of you to tuck me in."

As the Connecticut moonlight hit her freckled face, she looked a me quizzically, saying, "I didn’t tuck you in." I still smelled the musty odor and I said, "There must be a ghost here."

And so it went. But at brunch in the morning, I asked the owner of the B&B if there was ghost that populated the second floor.  She looked me straight in the eye, and said, "There’s a ghost who likes to tuck men in at night. She means no harm. But that last person she tucked in became really frightened and ran out of the room and into his car, and left.  Without his shoes."  The weird thing, though? That cold, dead ghost was warmer than the woman I was dating at the time.