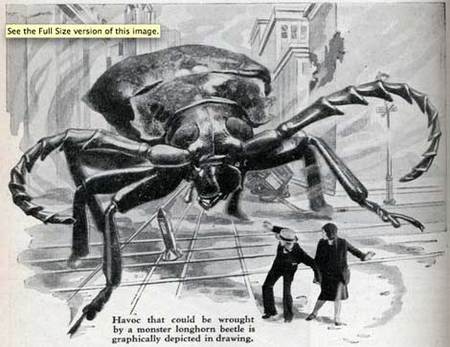 Nowadays, the career journalist has his creativity unfairly hampered by a "necessary" adhesion to the facts. It’s one of the stupider things they teach in journalism school: you can’t just make it all up as you go along. It’s one of the reasons I went into blogging.

But in the 1930’s? It was all different. Journalists were inveterate liars and if you wanted to draft up a story about how giant longhorn beetles were going to rampage through our metropolises and gobble down our commuting businessmen, then by gum, you marched right into your editor’s office, pitched him and waited for him to chomp a cigar and thoughtfully reply, "I like the cut of your gib, Burt. Let’s run with it!"

Look no further for proof than the December, 1930 issue of Popular Mechanics, which features a staggering article entitled "Will Monster Insects Rule The World?" And check out the amazing image that leads the piece! It’s right out of Them!

The article itself is a bit more sensible. It delights in plausibly deniable phrasing. "Scientists say that it is possible that giant insects may be the next dinosaurs." These are the words that allow even modern-day journalists to write pretty much anything they want, as long as they can find some scientist somewhere to say, "Well, yeah, I guess they could, but…"

Definitely worth a read, if only because its central concept is as wonderful as the bizarre turns it makes along the way: "Dr. Andrews told of treating a Mongol brigand who had been shot in the leg with an ancient blunderbuss loaded with nails and rusty scrap iron. When Andrews saw the patient, gangrene was so bad and the maggots so thick a giant syringe, used to treat sick camels, was necessary to wash the wound."