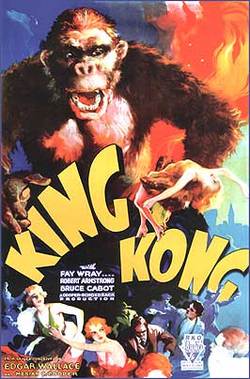 I’ve touched on this subject previously, but in honor of Halloween I thought I’d say a little more about a topic that has long been one of the most important aspects of horror movies for me: monster identification.

When I was a kid, the Wolf Man and the Creature from the Black Lagoon were only the most sympathetic in a long list of monsters I not only feared but felt a keen sympathy for. Monsters, as far as I could see, felt pretty bad a lot of the time, and I could see why: Thrown into a hostile and largely incomprehensible world, they struggled to fulfill their simple menu of desires, only to have the world constantly condemn and punish them for doing so.

“No,” said the world to the Creature from the Black Lagoon, “you can’t tear up peoples’ fishing nets to secure your dinner.” “No,” it said to the brutish but also bumbling and likable Kong, “you can’t bite the heads off of natives when you’re frustrated.” And of course most importantly: “No, NONE of you monsters can EVER have the girl. Even if it seems for a moment like she might actually like you, it’s really just a pose so you’ll loosen your grip on her for a second so she can get away.”

So it went for the beleaguered monsters of my childhood. How could I fail to feel their pain?

And so it largely remains today. In fact, now that I’m an adult, my feelings of identification with monsters have if anything taken on greater depth and nuance. I loved Bruce the Shark, for example, from the day Jaws opened back in the summer of ’75. But now as an adult, I identify with him even more. Like Bruce, I’m basically a creature of habit. I haunt the same basic stretch of shoreline from day to day, and am easy to track and predict. But also like Bruce, I have to put up with a world that insists on chasing after me and pecking at me simply for the crime of being myself. When Robert Shaw, after shooting that third harpoon into Bruce’s tough-yet-vulnerable hide, proclaims “he can’t go down with three in him – not with three he can’t,” I always find myself cheering Bruce on to do so anyway. “Go on, Bruce! Don’t let those bastards keep you on the surface. Plunge and leave them all behind! Show them they can’t keep you yoked no matter what they stick you with.”

My identification extends to the most seemingly un-sympathetic of characters. “Have you sent those documents off to the lawyer yet?” my wife asked me recently as I was cleaning up some dishes at the end of the day. “In time,” I mumbled, quoting the original Exorcist’s Devil-possessed Regan almost without noticing that I was doing so.

Even Leatherface elicits feelings of understanding and fellow-feeling on my part. (All that strength and ability, yet he lets the smaller, less-accomplished members of the family push him around as though his opinions counted for nothing.) And of course, being an underpaid writer of questionable achievements, I can scarcely get through a day without the Overlook’s brooding, put-upon caretaker coming to mind at some point.

I always kind of suspected it, but reading the responses I’ve received for some earlier posts has shown me that identifying with one’s favorite monsters is hardly a habit that’s original to me. A really good monster is, I think, a little like a battery. It needs to have a positive and a negative pole – qualities that repel and qualities that attract. It’s in that ambiguous, irreducibly mysterious play between those two poles that all the best monsters get their charge.