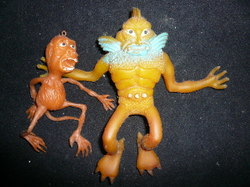 Monsterfest readers, I’d like you to meet my boys.

These rubber monsters were so very real to me when I was a kid, I’d even imagine various horror plots starring them. Sometimes, the little guy on the left would fight the Creature From The Black Lagoon-type guy on the right.  Other times, they would buddy up and fight the under-the-bed monsters that would wake me in the middle of the night from my dreams. My boys were always there for me, and I often thought about writing a script or short story starring the monsters. Of course, it always ended up being not scary enough, more like Monsters, Inc. than Pumpkinhead.

Now that I’m older, I don’t see the boys that often. But I’m not getting rid of ’em. They’ll always be on the shelf, cherished, and occasionally starring in my own demented version of Toy Story.