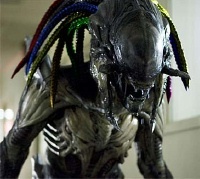 One of the additions to Alien 3 that I really love — and, heretic fan of the ugly duckling third film that I am, there are many of them — was the decision to have Xenomorphs take on physical traits from their host organisms. In Alien 3, this was used to great effect to generate a quadrupedal Xenomorph… a genius combination that made the alien slither sinuously through the dark on all fours.

I thought the addition was so genius not just because it allowed Fincher to create a different sort of Xenomorph outside of the rigid confines of James Cameron’s egg-facehugger-warrior-queen social system, but because it made sense within the universe. Organisms are voraciously virulent and wildly adaptive as Xenomorphs would need to have bodies like their hosts to survive… and kill. It also explains why the aliens in the first two Alien films more or less walk like men.

But enough’s enough. I guess the upcoming Aliens versus Predator: Requiem is going to feature a dreadlocked, crab-faced Predalien. I know, I know: I would had an orgasm, then passed out if you told me they were making a movie with a Predalien when I was, say, 13. But now? It’s just stupid and predictable.

No, what I want to see is the offspring of a chest-hugger and a Space Jockey. Not only is it canonical with the Alien films (the giant Space Jockey was the first creature we know of to encounter the Xenomorphs) but it would look like a bipedal elephant combined with a Xenomorph queen. Far cooler, if you ask me.