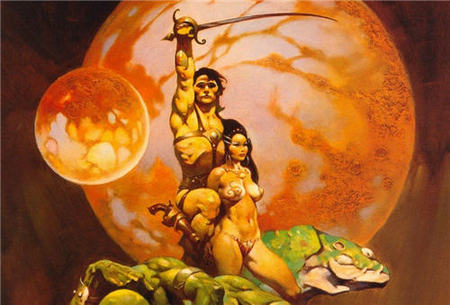 As a boy, I inherited a large wooden box filled with the pulp sci-fi novels my father had hoarded and devoured throughout the 1950’s through a remarkable frugality with his meager 10 cent a week allowance. When it was handed down to me, it was like being given the Ark of the Covenant, and the worlds I discovered within inspired a life-long love of science fiction.

One of my favorite discoveries in my father’s box of pulp was a complete collection of Edgar Rice Burroughs’ John Carter of Mars series. The story of a Confederate soldier who, through a mysterious gas, finds himself transported to Mars, where the lower gravity makes him superhuman and (eventually) a king, I’ve always thought this series would be an excellent choice for the Hollywood treatment.

Now it looks like I might get my wish. Pixar, creators of the Toy Story films, are looking to do A Princess of Mars as their next project. They intend on filming the novel as a combination of live action and computer animation… a first for them.

That all sounds great, but I’m a bit skeptical, only by Pixar’s admittedly excellent resume. I don’t believe Pixar has ever directed anything that wasn’t a cartoon comedy, and that approach just isn’t appropriate for A Princess of Mars, which is more, in tone, like Conan on the Red Planet (incidentally, Robert E. Howard — the writer of Conan — wrote a really excellent John Carter rip-off novel called Almuric that is almost literally Conan in Space.

And will they be true to the source? The idea of having a Confederate hero has all sorts of negative connotations in most people’s minds, as if the Confederacy was entirely a movement of racists looking to enslave the blacks. This doesn’t stand up, really, but it’s enough reason to be cautious for a company like Pixar, but the fact that Carter is a Southern Confederate is one of the things that really gives him spark compared to similar sci-fi pulp heroes. I imagine they’ll change it, but I’ll regret it.