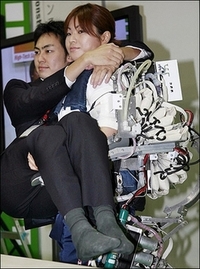 One of the many problems Japan is struggling with is its rapidly plummeting birth rate. The current rate of new births in Japan per annum is a paltry 1.2 percent, which means that Japan is rapidly "graying:" in another generation, there will be more Japanese close to or over retirement age than there will be new individuals to take their jobs or care for them.

No one has any good ideas on how to solve the problem, but techno-obsessed Japan is looking to robots for answers. Think Heinlein’s Starship Troopers meets geriatric day care: a group of scientists in Japan have invented a powered bio-skeleton which will greatly increase the strength of the wearer.

No one’s going to be Hulk-smashing army tanks with this thing: at max capacity, it will allow an individual to lift 100 kilograms with ease. But that’s just enough strength to allow even a slight Japanese nurse the ability to effortlessly lift an octogenarian.

I love the idea of an armada of nurses in power armor clomping through the Japanese old age homes of the future.

But maybe it’s time for Japan to get over its xenophobia and open up the doors to immigrants. It’s looking pretty clear at this point that that’s the only way the country is going to be able to survive. I’m not sure how a country of robots taking care of the elderly is any more a dilution of natural culture then opening the floodgates to the gaijin.