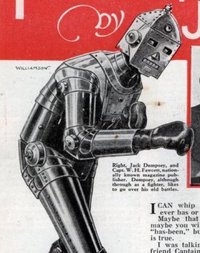 Since I was a boy, I’ve had a dream: to beat C-3PO clean to death with my fists, or at least until he starts crapping out circuit boards, whichever comes first.

I always assumed the origin of this fantasy of mine was Anthony Daniels obnoxious, gay-butler voice acting for the character. But archeology tells me otherwise. As it turns out, the desire to beat up robots goes back almost 73 years, if this article in the April, 1934 issue of Modern Mechanics is anything to go by.

The article makes clear that even former prize fighter Jack Dempsey was not immune to the inexplicable desire to make robots start coughing up cogs. According to the article, even the crackerjack robotic engineers of 1934 could build a robot that could surpass the prowess of a man in every way except brains, which is why Dempsey — a punch drunk boxer with multiple brain contusions — could kick the crap out of one.

It’s an interesting theory. One wonders how Dempsey’s smarter contemporaries would have done in a boxing prize fight against a robot. By that logic, Albert Einstein should have been able to make one explode with one quick rabbit punch, due solely to the raw power of his mind. Albert Einstein versus a Retro-futuristic Robot? Now that’s a fight I’d buy a time machine to see.

I Can Whip Any Mechanical Robot” by Jack Dempsey [Modern Mechanix]